How It All Began

A number of years ago when I was visiting my mother, she handed me a brochure about a dog therapy program. As soon as my mother saw it, she knew it would be something that would interest me.

My dog Maggie was a very sweet, lovable Border Collie mix who could do just about anything. There were twenty-one things the dog was expected to do as a visiting hospital dog, from carrying baskets, picking up things, and just lying quietly.  Maggie loved to do all of them.  I worked with Maggie until I felt she was ready for testing.

The day of testing she was fabulous except for the last task. Another dog entered the room, and she barked once. It was a friendly-greeting bark, but nonetheless it was a bark, which was an automatic fail.  Everyone was so disappointed, even the evaluator, but rules are rules.  So, we waited until the next testing a few months later and had the exact same results. A few months later we tried a third time. Maggie rarely barked and never barked at other dogs when we went for walks, but for some odd reason she must have thought she was supposed to greet others while she was in the conference room at the hospital.  Unfortunately, this ended Maggie’s opportunity to visit at the hospital. She would have been a great therapy dog.

Since we thought Maggie would be our last dog, therapy dog work became a passing thought. Then we fell in love with Casey, a Border Collie born with a congenital heart defect and without eyes.  It was love at first sight.  We thought he was the most amazing dog as he proudly walked down the steps to greet us for the first time. From that day on he became known as “Casey, the Blind Wonder Dog.”

​Shortly after he joined our family, my mother-in-law had a stroke.  So, the first few months we had Casey he spent every day at the nursing home with me.  When my mother-in-law would become agitated, Casey seemed to understand and would run to her side.  Blind dogs see with their hearts, and Casey intuitively knew that all she needed was a little love and comfort from him.  He was also very popular with the nurses and other residents. It became quite evident early on that Casey was a very special dog with a special job to do, and I needed to help him do it.  I wasn’t sure if he could officially become a therapy dog because he was blind, but I decided to find out. This was how our journey began. (to be continued next week) 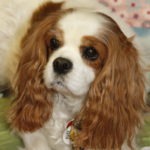 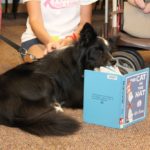 MORE CREATIVE WAYS TO USE A THERAPY DOG

CAN MY DOG BECOME A THERAPY DOG?